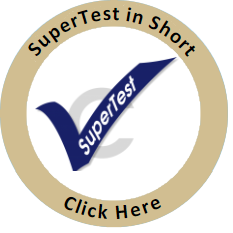 SuperTest is the test and validation suite for C and C++ compilers and libraries that has tracked the (ISO) language specifications for more than 30 years. It is a complete validation environment with:

The test suite is systematically structured so that it is clear what section of which standard is tested by each test. Therefore, it is also easy to configure which language version should be tested when executing the test suite.

While SuperTest is traditionally positioned as a tool for compiler validation, it is important to understand that the C and C++ language specifications define both the compiler language and the standard library. SuperTest validates both! The library suite of SuperTest covers C90, C99, C11, C18, C++03, C++11, C++14, C++17 and C++20.

The difference between the compiler language and standard library is important in the light of qualification for safety critical applications. The compiler handles the implementation of the language, and it is the tool that generates the target code. SuperTest is a perfect tool for compiler qualification. For standard library qualification you need more than the library test suite in SuperTest. The library consists of code that is linked to the application and is actually loaded into the device. For use in safety critical applications it is needed to provide requirement level traceability from the ISO language specification to the individual tests. To do so, we offer the SuperGuard C Library Safety Qualification Suite as an add-on to SuperTest.
Read more

Testing the optimizers is one of the hardest tasks in compiler validation. We have extended our test suite to maximize source code coverage of compiler optimizers, thereby maximizing the test coverage of your compiler.

We developed a test suite that specifically focuses on loop optimizations. Loop optimizations, which transform the program’s control graph significantly, require the additional verification techniques that are included in this optimization suite. For example, the tests in this test suite are designed to execute all of the code and branches that are generated by the compiler at the assembly code level, such that there are no gaps in the test coverage of the optimized program.

Verification of Optimization Correctness with SuperTest

There are quite some cases where the language specification requires the compiler to issue a diagnostic. SuperTest contains an elaborate subset of tests that must fail at compile time. If they don’t, SuperTest will tell you about it.

SuperTest’s Code Size Tracking is an easy way to monitor changes in generated code size between compilers or between different compiler settings. Code Size Tracking is built into SuperTest’s test driver. It logs the size of every object file and every linked executable for every test in the Supertest suites. The code size report generator can zoom in to executable, code, data or CSS segment sizes and creates either a one page summary with a histogram and an overview of the top-5 outliers, or a detailed report in CSV format that can be read into a spreadsheet. The report generator can compare the results of two SuperTest runs so that you can review the impact of changes at a glance.

The calling convention of a compiler specifies how functions receive parameters from the functions that called them and how their result is returned to the calling function. This implementation can be very complex, with the goal to make the action of calling a function as efficient as possible. In the verification of a compiler, it is therefore important to test if the calling convention is implemented correctly.
Read more

Easy to Use for Any Compiler and Target

SuperTest is easy to install on Linux, Mac OS X and Windows, 32 and 64-bit hosts. You are up and running in minutes. SuperTest’s straightforward scripts for compilation and execution make it easy to adapt to the most complicated compiler and execution environment setup. Do you have a simulator? No problem. Do you have a processor board at the other end of an RS-232 cable? No problem. SuperTest can be configured to qualify any C or C++ compiler toolchain for any execution environment and we provide example configurations for many of them.
Read more

More Than 30 Years in the Making

When SuperTest started in 1984, there was only K&R C. As ISO standardization progressed, SuperTest was extended to track the latest developments. We plugged holes in the suite by adding tests for errors not initially found. We created generators to add systematic testing for complex parameter spaces. SuperTest is now the most complete validation suite for C and C++ available.

New SuperTest features over the years

SuperTest includes many more unique features that are not found in other test suites:

Try SuperTest
We use cookies to ensure that we give you the best experience. By continuing to use our site, you consent to our cookies. Read more about it in our Privacy Policy
Got it
Manage consent